The Space Marines fear no Evil for we are Fear Incarnate!
Reply

01 Mar 21, 18:40
Thanks all ;) @Karak Norn Clansman @James yes im really happy with the swords aswell ty for helping me out with the airbrushing @James and @pawl !!!
Ive primed the 3 eradicators, but im feeling so cheesy when I look at theyre datacard haha. Its either them or 5 intercessors, or the indomitus lieutenant or indomitus captain or the outriders...
James liked this

03 Mar 21, 08:04
So I've started on the eradicators, and I'm trying out an airbrush approach for the back armour preshading it : matt black army painter, corvus black 60 degree, mechanicus standard grey 45 degree and administratjm grey a small amount at the high points aswell as spot highlight. Though I needed to turn it down somewhat to make it fall in line with the rest of my army. They will be to "different in a way compared to my other RG minis, but the effect is amazing. Im in love with my airbrush me thinks :p Used black templar contrast as a light layer over the whole model to tune it down and have to say i like it. The effect of the highlights are there, though not in your face there, more subtle. When its dark they look just black, but in the right light <3 ty @pawl and @James :D ill post pictures of em later this evening. Allso the time saving part of airbrushing compared to normal brush painting is definitely there aswell. Did a layer of gloss varnish and shaded the whole model after I had blocked in all the other base colors, need to tidy it up someplases after the wash though, but its minimal. Watered down nuln oil with some airbrush thinner to make it easier,less staining was the idea atleast. Though I'm considering branching out to oils or enamels for the shading/resses shading part, as it seems better then akryl washes... dunno. Allso since I'm rather new to the airbrushing part, well its an learning experience :p Allso found out that black templar is more of a really dark blue than a black paint. But that could allso be from the preshading idk.... Anyway as I said, ill post a picture of em this evening;) 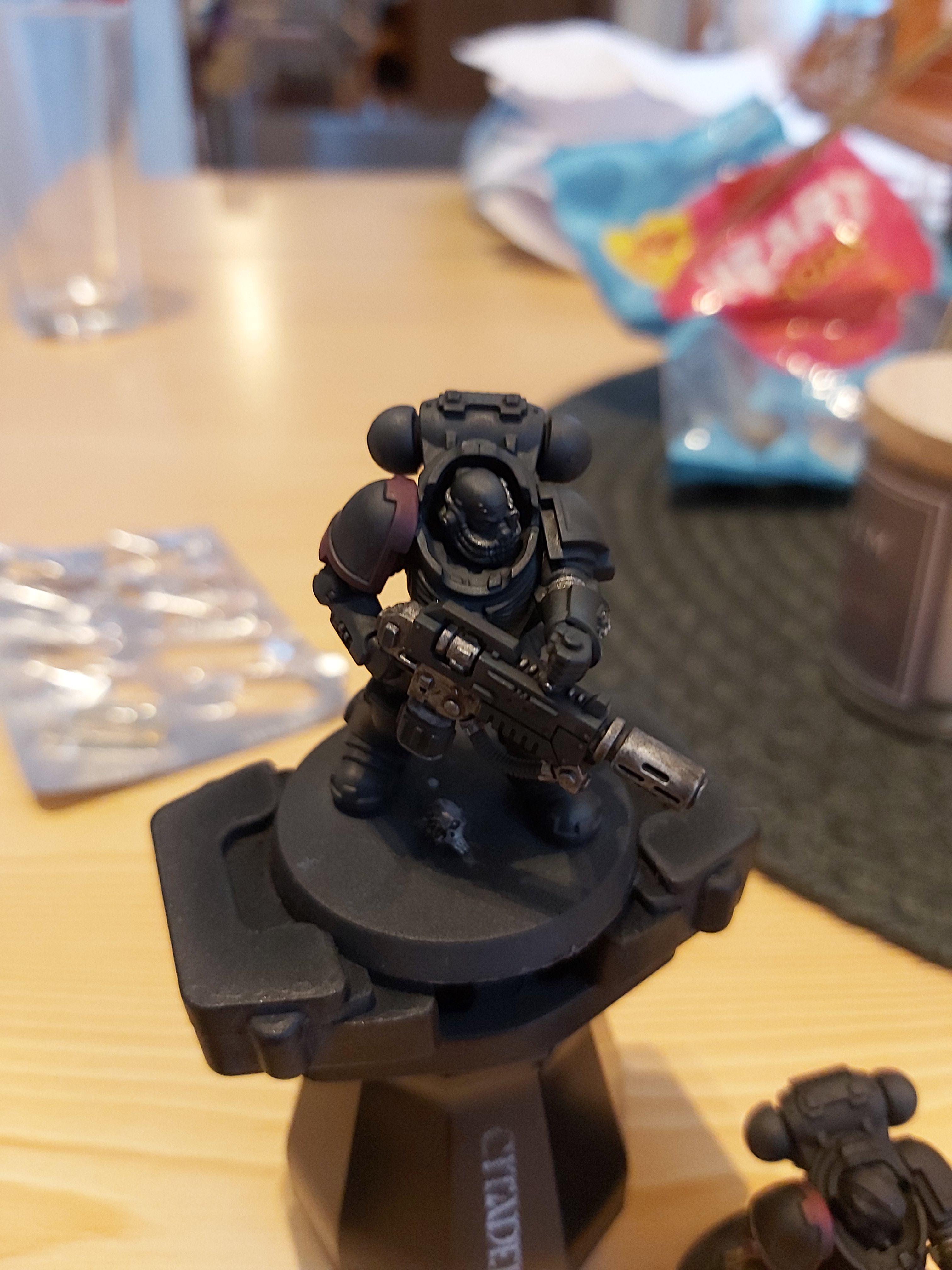 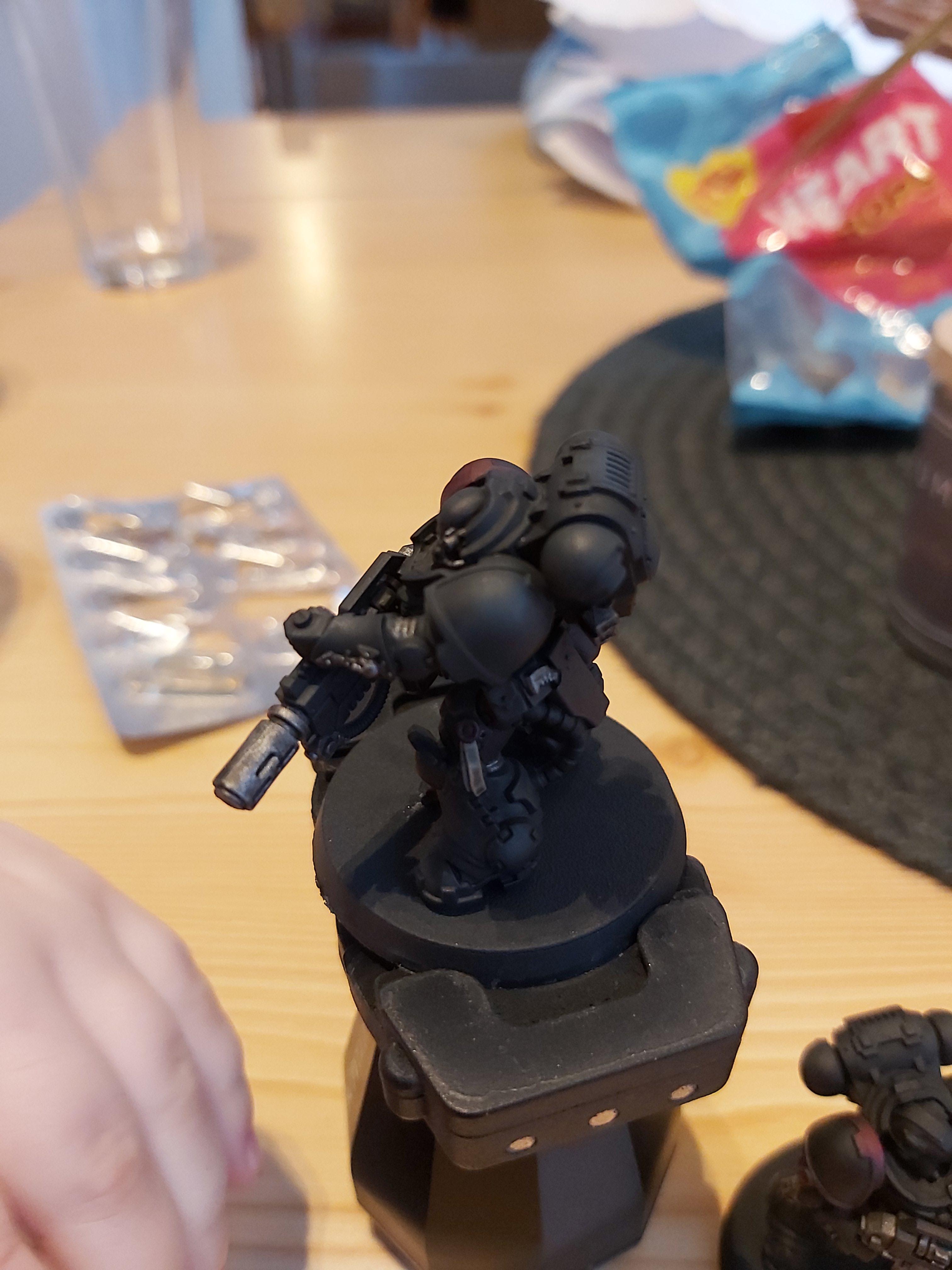 And there they are :D hard to see in a mobil phone camera but meh. :D this is before layering back up again after shading step ;)
James liked this

11 Mar 21, 09:53
@James what would you use to cover a black colored zenethial highlighted model? A ink of some sort? On the eradicators i used black templar thinned with vallejo airbrush thinner... but I feel it covers to much in a way... really hard to get the blend correctly... hmmm if i was to paint a whole new color scheme on a new chapter i probably would just use my airbrush.... takes away a full day of basecoating:p and the effect is stunning detail wise on the miniatures:p i could go for a pure white on the last highlights before shading it down completely... :p hnmn dunno. Wiuld be a sharper highlight through the shade, instead of useing a light grey?

11 Mar 21, 14:11
Ha bro im in the same pain as you.
I think i got a good effect when i tried nuln oil with thinner through the airbrush for glazing like that.. But it wasnt amazing.

Not same colour but you get the idea... would be an alternative painting route for you tho! Enamel based.
Pharia liked this

Cant have much left to do in the indomitus box now?
Pharia liked this

12 Mar 21, 18:46
Outriders wich im really looking forward to trying out on the table! Looks so good:D eradicators, lieutenant and captain;) who im not really sure what to do with.... been thinking something like this

The issue I've having is the skeletal and all that parchment aswell... need to have a difference in color on hes robe. Parchement and skeletal with it going all over the place...